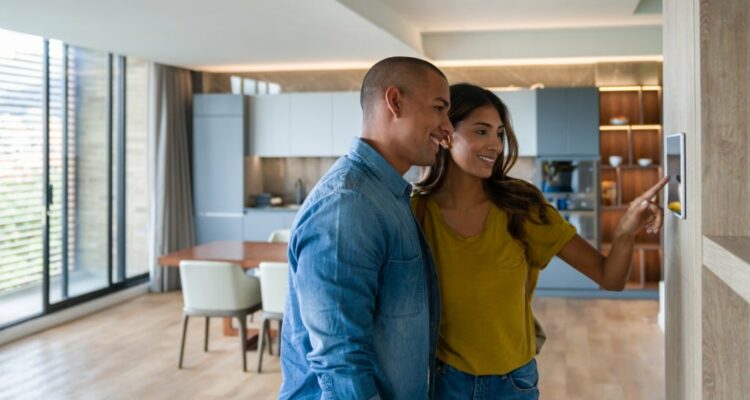 Civilizations have used many different systems to protect their homes. Ancient peoples used fire or night watches for security. Medieval feudal lords installed moats around their castles and put sentries on guard. Benjamin Franklin hung a mirror on the side of a building, angling it so that someone inside the home could see who was at the front door.

Although Franklin joked about ducking out the back door when his mother-in-law came to visit, security and safety have been important to humans for centuries. The modern home security system that we have today was born out of these ideas.

Security Before the Internet

In our lifetime, the internet has probably been the biggest invention to revolutionize the world. In the 1800s, developments in electricity and the telegraph were key to changing the home security market. The telegraph opened communications between faraway places. William Channing, an inventor who worked with Alexander Graham Bell to develop the telephone, used the telegraph to create a citywide fire alarm system in 1852.

A few years later, another inventor developed a system that let home and business owners contact law enforcement from a remote call box. This invention was the beginning of a company called American District Telegraph. Today, we know it as ADT, but that isn’t the foundation for modern home security systems.

In the 20th century, technology evolved even more as the infrastructure for the telephone improved communications and new technology emerged. The modern components of a home security system, such as surveillance cameras, motion sensors, and microphones at doorbells, got their start in Jamaica, Queens in New York in 1966.

Marie Van Brittan Brown worked as a nurse, and her husband, Albert Brown, often worked different shifts than she did. She did not feel safe at night in her neighborhood due to crime rates being so high, and it didn’t help that police response times were often slow.

Marie and her husband developed a home security system using a camera, TV monitors, peepholes, and microphones. They put the camera at one of the peepholes. This camera connected to the TV monitors, allowing her to see who was at the door, much like modern doorbell cameras. They also used microphones to talk to whoever was outside.

Marie and her husband submitted a patent of their invention on August 1, 1966. The patent took over 3 years to be granted, but Marie’s name was on top. Considering the politics of the day, it was impressive that Marie’s name was on top of the patent with her husband’s name below hers. The New York Times ran an article about the invention just days after the patent was granted.

Marie and her husband continued to work on home security. She went on to invent a remote that would unlock the door. She wouldn’t have to get up to let someone in. Marie and her husband also applied for a patent on a system that contacted first responders with just the push of a button.

While Marie’s invention worked, the cost to implement it was high. It was difficult to get homeowners interested in the system. Her idea revolutionized the home security market. Unfortunately, she never saw the impact of her invention. She received an award from the National Scientists Committee for her ideas and would go on to be cited in more than 30 patent applications. Unfortunately, she never capitalized on her invention as much as she should have.

Marie’s closed-circuit television system is thought to be the predecessor of many of the components of modern home security systems today. CCTV wasn’t exactly a new technology in 1966, but it wasn’t being used in domestic applications, being primarily used for the military.

The technology we have today that didn’t exist in 1966 allows us to watch CCTV on smartphones, anywhere there is internet service. This technology connects with audio systems, allowing people to speak and listen through electronic devices regardless of location.

We’ve come a long way since Marie’s time. Here are other components of a home security system.

US Protective Services can help you install the security components that fit your home. As we talk to you about the latest developments in home security, remember to thank Marie Van Brittan Brown and her husband. Our experts know home security and how to protect your family. Contact us to get more information.

What to Look for in a Home Security System

What Is the Difference Between Surveillance and Security Cameras?

As a home or business owner, your eyes can't be everywhere at the same time.…

What Is CCTV and How Does it Work?